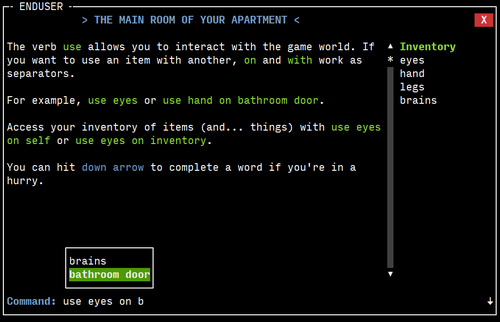 We have released the Rebotched update to ENDUSER, bringing months worth of small tweaking and improvements to the game to bring it into a more complete and playable state. The layout of the world and most of the descriptions have remained as they are, but quite a few new pieces of description have been added and we've also tried our best to improve some of the issues we identified based on feedback and our own testing.

In a nutshell the new features for this release are as follows:

When the game originally released we were working with the deadlines imposed on us by the Linux Game Jam 2018 and thus we had to prioritize shipping a game in whatever state it was at the time. This meant we released the game with many rough edges and even straight-up game breaking bugs. We have now spent the last couple of months polishing various areas of the game and trying to make it a bit more approachable without sacrificing our vision of how the game should play.

The most visible of the new features is the new terminal user-interface (TUI) which we created in an attempt to make the game more newbie-friendly. The TUI allows the player to see the inventory and other relevant information in their own dedicated sections and use the mouse to help compose commands. This should help people who have no prior experience playing text adventures. However, we are still not 100% happy with how the TUI turned out and it has some technical shortcomings that make it a bit annoying to use at times. Therefore we still include the original command line version,  which we call "Classic" when launching the game via the Itch client.

The Rebotched update also brings an experimental beta port of the game to Windows. None of us use Windows as our main operating system and thus the version isn't necessarily up to the standards we set for the Linux version and a fair number of the features we provide for the Linux version do not work. If you are interested in tweaking the game to work on Windows, we provide the full source code along with assets over at https://gitlab.com/silly-linux-game-jam2018-game/pydler.

At this point we are overall happy with how ENDUSER works and we intend to move onto new projects. We've had a lot of fun writing the descriptions and items and I think we've also learned a lot while making the game. We hope that some of you will be entertained at least for a little while by our rather silly creation.

A short text adventure about a person trying to get through a day of their life.