We have now released the post-jam update we have been working on after Linux Game Jam 2019 ended. This update brings a number of new features, bug fixes and tweaks that we were either planning during the game jam but didn't have time for or which we came up with after the game jam.

So, the 1.5 version of the game looks better, sounds better and generally just works better. All of the levels we designed for the game have new colour maps that make them quite a bit nicer to look at. We also now have sound effects for jumping, dying, pressing switches, bouncing on a trampoline etc. 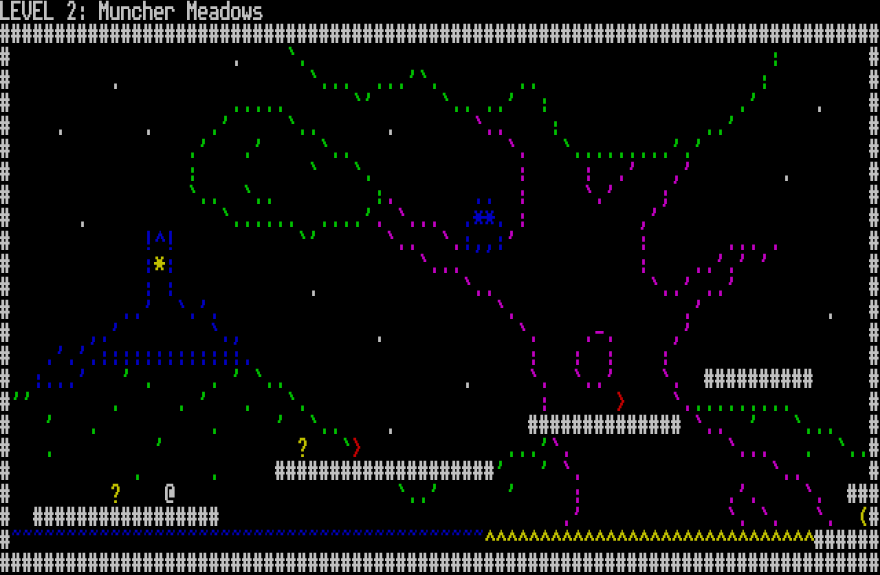 In this update we also promoted the pdcurses version as the default option for Itch. This is because that version now responds to keyboard input in a way that is more familiar to people who play platformer games. The  ncurses version is still included along with a "hardcore ncurses" version which is compiled completely without SDL2 dependencies. We do not know why you may need that, but it is now an option for those who prefer their software without the "bloat".

We also tweaked some of the levels and the beginning levels now provide a bit more exposition for the game's story. Some levels, such as Pit of Bats, have also been tweaked slightly to make traversing them a bit more comfortable without sacrificing too much difficulty.

The game now also supports scrolling on the engine level, which allows creation of levels that exceed the size of a single screen. Currently none of the levels we have written for the game use this ability but this means that players willing to make their own levels will not be limited to just 80x24 levels. If you wish to learn about how to design levels for Cursed Pl@tformer, you can find the level editing document on our Gitlab page. We'd be excited to see your levels if you decide to design some.

Finally, this update fixes a number of small bugs that could lead to undefined behaviour, such as crashes or accidentally clipping through levels.

We are still planning some small fixes and improvements for the game and we also intend to release a Windows port and fix any serious bugs that might still be found in the game. However, at this point we consider the game to be feature-complete and we aren't planning on adding any new content, such as new levels, to the game.

We  hope that you will enjoy our little creation as much as we've enjoyed making it!